What is winter field day?
WFD is based on the same idea as Field Day.

Its main purpose though is “To encourage emergency operating preparedness in the winter”. Of course taking into mind all safety concerns that go along with WFD should be priority, for us in the North it is hypothermia, for those in the South sunburn and UV is still a concern.

There are bonus points and multipliers and the scoring scheme is the same with callsign, category and section being logged and at the end a Cabrillo log submitted to the score keeper. Bonus points for this event are as follow:
1000 pts for if not using commercial power
1000 pts if outdoors
1000 pts if outdoors away from home
500 pts for working WFDA bonus station W8D.

My plan was to hike into my winter shelter that I have down Walker Road in Neebing Ontario. It is a 3km hike pulling my sleigh, radio gear and survival gear in. Well we had some heavy wet snow the Friday night and it made pulling my sleigh a challenge considering I would have expected some of the locals to be out with snow machines and the trail would have been packed. Well that was not the case, so after 30 minutes and only getting 1 km from the main road I hauled off into the bush and found a open area to call camp, get the fire going, set up the gear and get ready for the 1700 UTC start bell.

My gear consisted of the Xiegu X108G transceiver, Chameleon Hy-Brid Micro with 60’ wire and counterpoise, Emtech ZM2 tuner and P-Box battery box. Strung the wire in the tree, set the rig to CW and tuned up the antenna and was ready to go on CW operating QRP 5 watts. Issue was it was now +4c and had lots of snow and drops falling from the trees and onto my gear, so my wool blanket protected the gear. 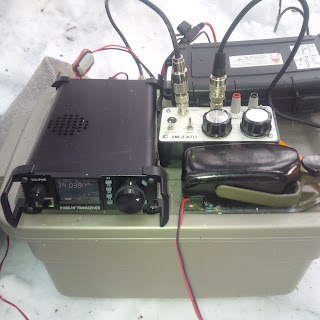 My Gear Set Up in Operation mode 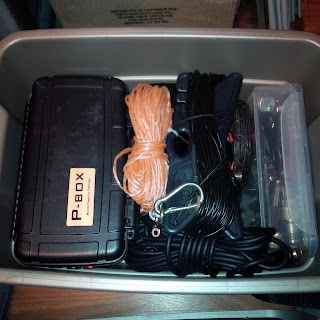 Gear packed for travel in sleigh

Bands were not the greatest this afternoon, and I spent time calling CQ instead of the Hunt and Pounce method as there were other contests going on as well. I was able to hear Europe and South America on 20 meters as the day progressed. I kept the fire going and made homemade soup on the fire while watching rabbits frolicking in the great weather. I was able to make 6 contacts that afternoon during 3 hours of operation and achieve the main principal of WFD. My final score with bonus points was 3006.

I worked into KY(x2),NLI,NTX,GA and QC . The one station in KY was 1M or 1 operator mobile. The station in Quebec is the Nord DX Club and that contact can be seen and heard here on my YouTube Channel:  https://youtu.be/M2FkxvAXWR8

Here is a picture of me at the operating position of VE3FAL 1O ONN: 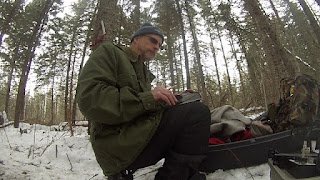 Was a super day outdoors as always, no mosquitoes, no ticks, warmth and of course radio. I hope next year brings good weather and good conditions as well, and maybe look to stay overnight in the bush and operate and keep up on my outdoor survival skills.
Take care everyone
Fred
VE3FAL
Thunder Bay, Ontario
Posted by ve3fal1@gmail.com at 11:51 AM No comments:

First off I want to wish all who read my blog page a very Happy New Year and all the best in 2016.
I have been a bit behind on blog writing as I have been busy with family, holidays, our business, enjoying the great outdoors, the vast playground that mother nature has given us, and making the best I can with what we have before us.

Many of my outdoor outings can be seen on my YouTube Channels which incorporate, radio, outdoor survival and more.

I have had the great opportunity to test and review the latest of great radios from Yimin at YouKits Canada. His webpage can be found here:
YouKits Canada

As many of you know I am a huge fan of the HB1B MKII and that it travels with me to many of the remote, fly-in communities in Northern Ontario that I travel too, the radios have fantastic receivers, great filters, and last forever on the battery pack in these radios. I usually compliment the system with a Elecraft T-1 tuner, micro switch key and small amplified speaker along with a zip cord antenna that all fit in a small tupperware container, is light weight and ready to go either from a outside area where I am staying or even in my room.

So to continue with the first part of my review.
The radio arrived in only a few short days after Yimin sent me the
tracking number, and was sent via TNT and delivered to me. The radio was nicely packaged and no signs of damage were seen on the package. 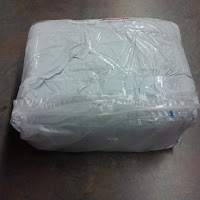 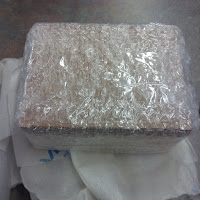 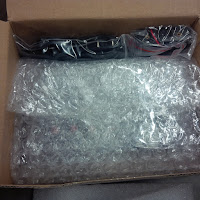 It was well wrapped both outside and inside, once the box was opened it included the radio, charger for battery, extra battery holder.

I opened the radio up and installed the rechargeable battery and then charged the battery up getting it ready for action. The charging process for first time around took just over an hour to get the LED to GREEN and in run state. 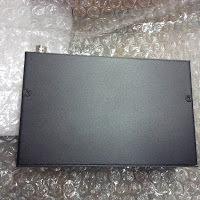 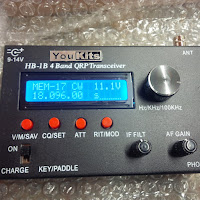 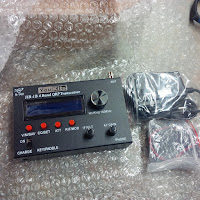 Some of the specs from the YouKits webpage:
The manual for the radio can be found here:
HB1B MKIII Manual

I will continue my review with the radio in action via video and of course through the blog page.